It was early Saturday morning. I looked at the clock that showed 3:45. Ramona and I had decided to walk home from one party. To air out our heads, so to speak. Although it was late at night, or early in the morning, it was about 20 degrees outside. Such a time was more like the night heat of a southern land, which is quite atypical for Latvia. Walking over the stone bridge, I jokingly said that I would like to cool off at such a time. I had forgotten that you shouldn't joke with Ramona. She immediately offered to jump and swim in the Daugava. Come’on -  Is she serious? How clean water could there be? And what would the municipal police say about it if they drove by? But except for the car passing by in a hurry, I didn't notice anyone around at that moment. While I was thinking about every for and against, Ramona was already naked. Apparently, she was afraid of damaging her Victoria`s Secret underwear. If I thought for a long time, we would expect a sunrise that promised to light up the city very soon. So I quickly dropped all my clothes and joined the night swim. It was really fantastic! Ramona could be the perfect face for Nike's "Just do it" ad slogan.

In the days that followed, I discovered that in addition to her passion for warm-water reptiles, Ramona had at least two more. An enviable collection of sex toys - imaginative lingerie, several vibrators, and various objects, the use of which I could only guess. Of course, she had taken all this with her as a survival kit, staying with a friend for a couple of days while the apartment was being renovated. And as a spicy addition - the habit of walking around the apartment (and not only) completely naked at any time of day! If at first Ramona's surprising spontaneity fueled me, then over time everything started to look a little different.

I was longing for physical activity at my favorite sports club and went there one evening to lift the bars. The training was very good and I even managed to set a personal record in printing. On that positive note, on the way home I wondered about the entertainment options tonight. When I show up, it could be said that one of the entertainment options, which I definitely hadn't chosen myself, was in my living room with three people, happily drinking wine. 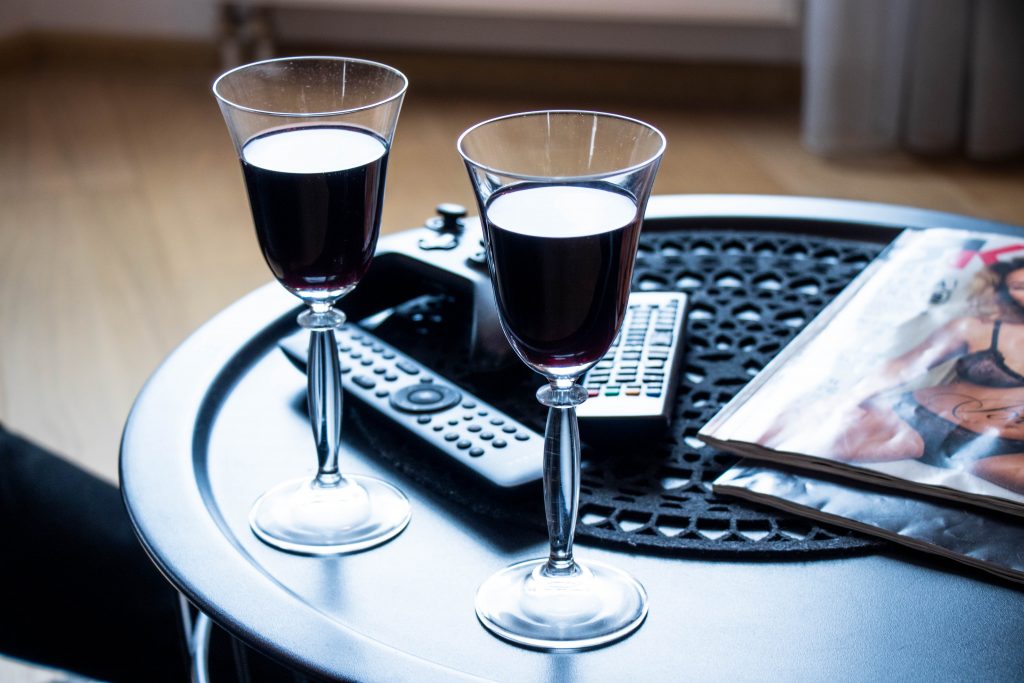 Ramona left alone in the apartment, was bored and went to the neighbors to find a company to enjoy Rioja red wine, because Spanish wines are company wines and drinking them alone is an unacceptable sin, and she is a wine-believer tonight! O-o-k… well at least Ramona was dressed in an atypically polite way - although the shorts were more like lingerie and at least a third of her butt was visible. Not to mention the white blouse tied in a knot above the navel and the outline of Ramona's chest shone through it. But she was definitely more dressed than all these days together, when she got up in the morning, had breakfast, watched a movie, opened the door to the deliverer of the ordered food - her peak was dressed in lingerie. Now, if someone called at the door, I would always get up first…

So, in my living room, in a very relaxed mood, Ramona, my neighbor, whose name I don't even know, and his girlfriend sipped wine. I've seen that guy on my floor every now and then, and if he wasn't alone, he had a different girl by his side every time. Ramona poured me wine and carelessly continued to tell stories. Although at first, I didn't feel very happy about this unexpected "surprise", I like to be in the company of other people and communicate. And even that evening, everything was fine until the guy started laughing too loudly at Ramona's jokes and appreciating her body too conspicuously every time she got up to change posture or pour a drink. When the atmosphere of the evening had been thoroughly warmed up by several southern red wines, the neighbor's girlfriend looked asleep and neglected, because he himself had inadvertently sat very close to Ramona and seemed to have touched her at every opportunity. It started to get on my nerves and without unnecessary ceremony, I said the evening was over and that everyone should go home. The guy, as if recovering from a movie that only wraps around his head, remembered where he was and that he hadn't come here alone, called his girlfriend for the night, and went away. It was not enough that I no longer knew what to expect when I arrived at my own home, Ramona openly flirted with some random neighbor and rejoiced about it. 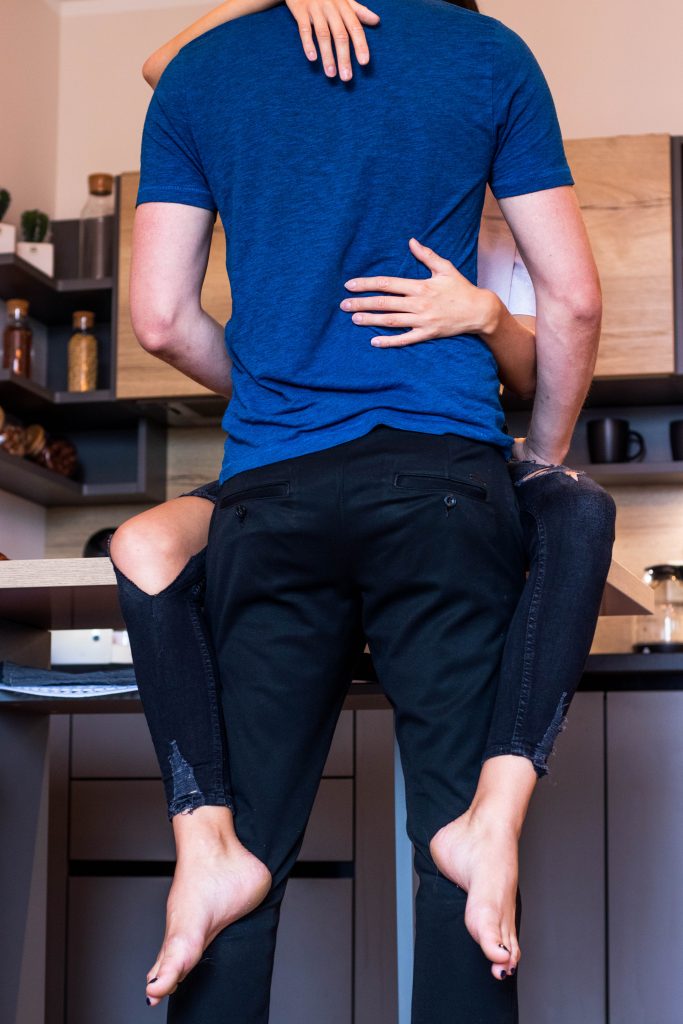 The next day, after visiting my parents, we went on a short trip with Ramona. It was a bit cloudy, but the light was also good enough for a car photo shoot. I was morally and also practically preparing to sell my baby. When I found a suitable place in Ķīpsala, I started taking pictures from different angles, Ramona suddenly thought that with her in the frame pictures would "sell better". She turned the music to the maximum and used the body of my car and the cabin for herself as a stage. The show was good, in Ramona style, which does not leave anyone indifferent. I let it go and kept taking pictures, postponing the necessary pictures for sale until later, when Ramona would have lived her star hour. By the third song, as expected, Ramona was almost completely undressed. Due to the sound of music, I hadn't noticed a well-dressed couple coming out of the restaurant that passed us just as Ramona took off her bra, her last garment, and got out of the car to show herself in all her beauty. She is really crazy! I wanted to end the photo session before another random spectator appeared. Ramona scoffed, but not for long. Everything in her world happened spontaneously, quickly, and to the whole bank. On the one hand, it drives blood, but on the other hand, it sometimes made me feel uncomfortable. In addition, this daring photo session had left its imprints on the car roof and hood, I probably won’t get away with just polishing this time. 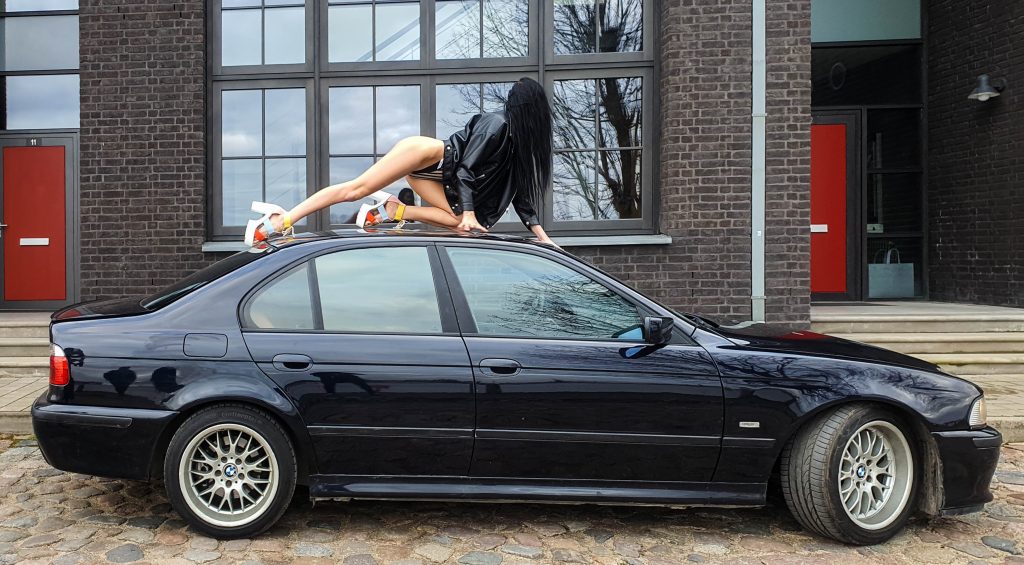 Ramona's last "show" strengthened my conviction that this temporary "cohabitation" was too long. One evening, after trying out one of her belongings (I will skip the details - this is the case when I will put a little censorship on my own!), We were left in bed, both sweating like after an intense CrossFit workout. She got up to take a shower. After a while, I heard a scream and something hit the bathroom door. Ramona hurried out, grabbed my favorite jeans, and threw them out the open window !! At that moment, out of confusion, I didn't really know how to react - after you discovered the most intimate parts of the other person's body, there is a certain dose of tenderness in the atmosphere. But - this view annoyed me. What the hell is going on? Leaving the shower, Ramona stumbled on my pants, which were tossed on the floor. Ok, I asked her to go downstairs and collect the pants she had tossed out. Behind the anger, a hellish glow literally shone in her eyes. So she stood there and dispelled accusations of how messy I was and that it wouldn't be long before she breaks her neck. Although I'm actually pretty neat. On the other hand, one of Ramona's most characteristic features is an exaggeration, and she knew full well that my 150-euro pants, as well as the watch I had put in my trouser pocket after training, were currently tossed on the street because of her. I usually avoid being harsh in my expressions, but this time I don't owe an answer. Amazingly, no matter what she does, she manages it perfectly, including taking me out of patience!

Ramona fell silent, then went to get dressed and went down the stairs. When she returned and rang the doorbell, I had decided to spend the evening alone to let off some steam - I really didn't know what to expect from Ramona anymore. I was sure that she would not "disappear" and find a place to spend the night. After all, her own apartment is not burned to ashes, there is simply no water available for a while. I exchanged jeans for her purse and closed the door with a comment - to sleep with my anger and maybe see you tomorrow. I heard her turn around and angrily walk away. I had completely forgotten about the iguana! But during one day nothing bad could happen to it. I touched my jean pockets, the watch I left there wasn't inside. Of course, it didn't lay on the street anymore as well.

After several hours, I hadn’t yet fallen asleep, so I took the chilled beer out of the fridge and sat down to work for a while. When the doorbell rang, I was surprised to see Ramona, because I didn't expect her to return tonight. But here she was, holding a bottle of reconciliation whiskey. When she saw that I was not going to invite her to come in, she began to slowly pull off her pink dress and gracefully threw it to me through the half-closed door, leaving only her underwear. I pulled out the phone and captured a few shots for myself (and you, the reader). Then I took the bottle Ramona handed out and closed the door to annoying her for a bit. 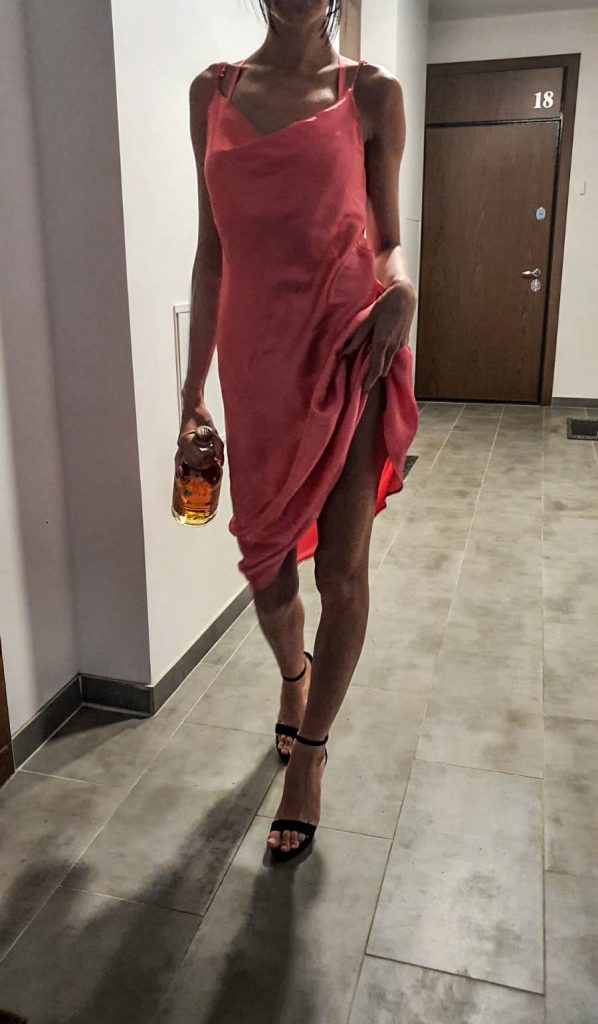 Ramona pressed a finger to the ring button and no longer let go. When I still didn't open the door, I heard Ramona say loudly if I don't let her in, she will have no choice but to go to the neighbors to give her a piece of clothing. I remembered that guy literally undressing Ramona with his eyes that night, and that replica was like waving a red rag in front of a bull's eye - well, no! I will not bring such joy to him. Ramona walked into the apartment with a triumphant smile on her lips. Although she got in with manipulation, "reconciliation" sex did not suffer.